The autumn migration watchpoint of Gruissan/Narbonne (le roc de Conilhac) is situated in the Aude littoral zone, 5 km from the seashore as the crow flies.

Roc de Conilhac is ideally situated to funnel the autumn flow of migratory birds, mainly descending through the Rhône valley and continuing along the western flyway to Spain and beyond. The slightly higher vantage point offers a 360° panoramic view on the plains of Narbonne. Massive migration can be enjoyed here with a northwesterly wind, locally known as “le cers”, blowing regularly and often quite strongly from Narbonne towards the Languedoc coast. In the area, a northwesterly is a major constraint for migratory birds in autumn. As the birds are predominantly flying from northeast to southwest, the wind pushes them towards to coast. Many migrants will avoid a sea crossing and are caught in a migration bottleneck, between the Mediterranean Sea and the Corbières foothills. During top years, 20.000 - 25.000 raptors and 2500 - 3000 storks (mainly White Stork) have been counted. Perhaps uniquely in France, 30 raptor species have been seen from roc de Conilhac during autumn migration (with up to 25 species in a single season, e.g. in 2007 and 2008).

From Narbonne, drive towards Gruissan (from the motorway, take exit “Narbonne Est”). Follow at the entrance of Gruissan (first roundabout) the signs « Gruissan centre », and then « Gruissan-Village ». Follow at the next roundabout (beyond the bridge) « Gruissan-Village ». To avoid the village centre, take towards “Salin du midi” (via the north along Gruissan lagoon), and always follow « salin ». Across the bridge over the canal between the lagoon and the sea, take right towards « Narbonne ». 3 km further, across a humpback bridge, you will notice the Observatory of LPO Aude (shortly before a bridge over a canal). There is a car park beyond the bridge and the migration watchpoint is situated on the hillock to the north. 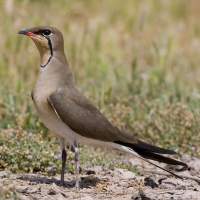 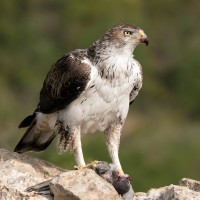